Electric cars were supposed to be the future – or at least look like it. So now they’re here, why do they still look like ordinary petrol and diesel cars and not dazzling props from a science fiction film?

Before they hit the market and became relatively mainstream, many imagined (or at least, hoped) that electric cars would resemble the Light Runner from Tron: Legacy. After all, without the need for an internal combustion engine, an exhaust system and a fuel tank, electric car designers should have the creative freedom to rip up the rule book and create some truly eye-catching vehicles.

But this hasn’t really happened. Park a Renault Zoe next to a Renault Clio, for example, and compare the two. While there are subtle differences and styling cues that suggest the Zoe is electric and the Clio isn’t, the overall body form is strikingly similar. In fact, the Zoe is assembled on the same production line as the Clio and Nissan Micra.

So what’s going on?

One explanation could be economic; the initial cost outlay of using the Clio’s existing platform for the Zoe is far lower than developing a completely new design.

But this absence of a radical departure in the design and styling of electric cars could also be market led, responding to customer expectations and perceptions. A new car is a significant investment and so consumers are typically conservative when choosing one. Manufacturers typically invest billions of pounds developing new models and they want to be sure that they will sell.

But there are also technical reasons for the lack of divergence between petrol and electric vehicles. Automotive companies have spent decades perfecting the existing form of the car, so that models are optimally aerodynamic, ergonomic and safe. To depart too radically from tried and tested designs would be a major commitment with expensive consequences in some or all of these areas.

Consider aerodynamics. Without the need for an engine, theoretically you could do away with the bonnet and the “nose” of the car – think the classic electric milk floats that dutifully graced housing estates between the 1960s and the 1990s, when home milk deliveries fell out of fashion. 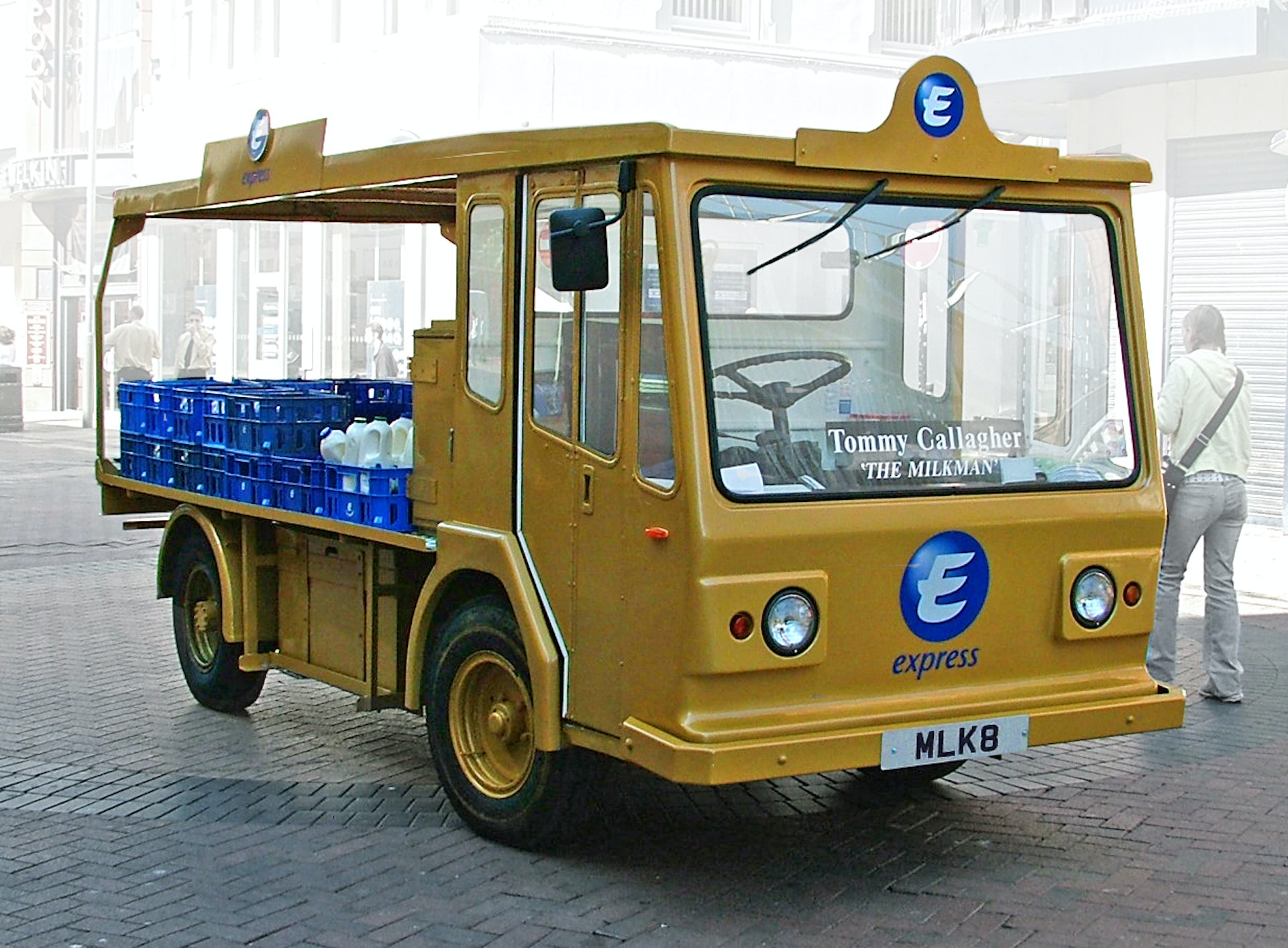 Electric, yes. Aerodynamic, no. By Tagishsimon, CC BY-SA
Cars built along these lines would certainly stand out. But these milk floats were renowned for their lack of speed, designed instead to suit the constant stop/start nature of their role and the relatively short distances of their “milk-rounds”. They were well suited to this purpose – the quiet hum of their electric motors ensured that they could be driven almost silently through housing estates when most of the residents were still asleep – but operating at low speeds meant that there was no need to consider aerodynamics to improve their efficiency.

But aerodynamics and efficiency matter when designing a car. A great deal of investment is spent modelling the aerodynamics of a car through computer aided design software and scale clay models in a wind tunnel. The main idea is to reduce the air resistance of the vehicle when travelling at higher speeds, lowering its “drag coeeficient” and increasing its fuel efficiency.

Thanks to years of extensive research, most hatchbacks and saloon cars for sale today have a very low drag coefficient – typically 0.23 to 0.36, although this figure is higher for SUVs and 4x4s. Electric cars – the Tesla model 3 at 0.23 and Tesla model X/S and Toyota Prius at 0.24 – currently have the lowest drag coefficients, but they still look like traditional cars rather than anything radically futuristic. To go completely back to the drawing board potentially would mean throwing away decades of advances.

And then there’s ergonomics. This essentially is to do with how easy the car is to use: how easy it is to get in and out of, and whether the controls, the various knobs, dials, pedals and levers, are within reach and have a clear purpose. This effects the dimensions of any car. To accommodate an ageing population, manufacturers are now designing cars that are ever easier to access – which typically has increased their average height.

It may be tempting to design a car that looks like nothing else before it, but you’re not going to sell many if drivers can’t get in without bumping their heads or struggle to reach the brake pedal. 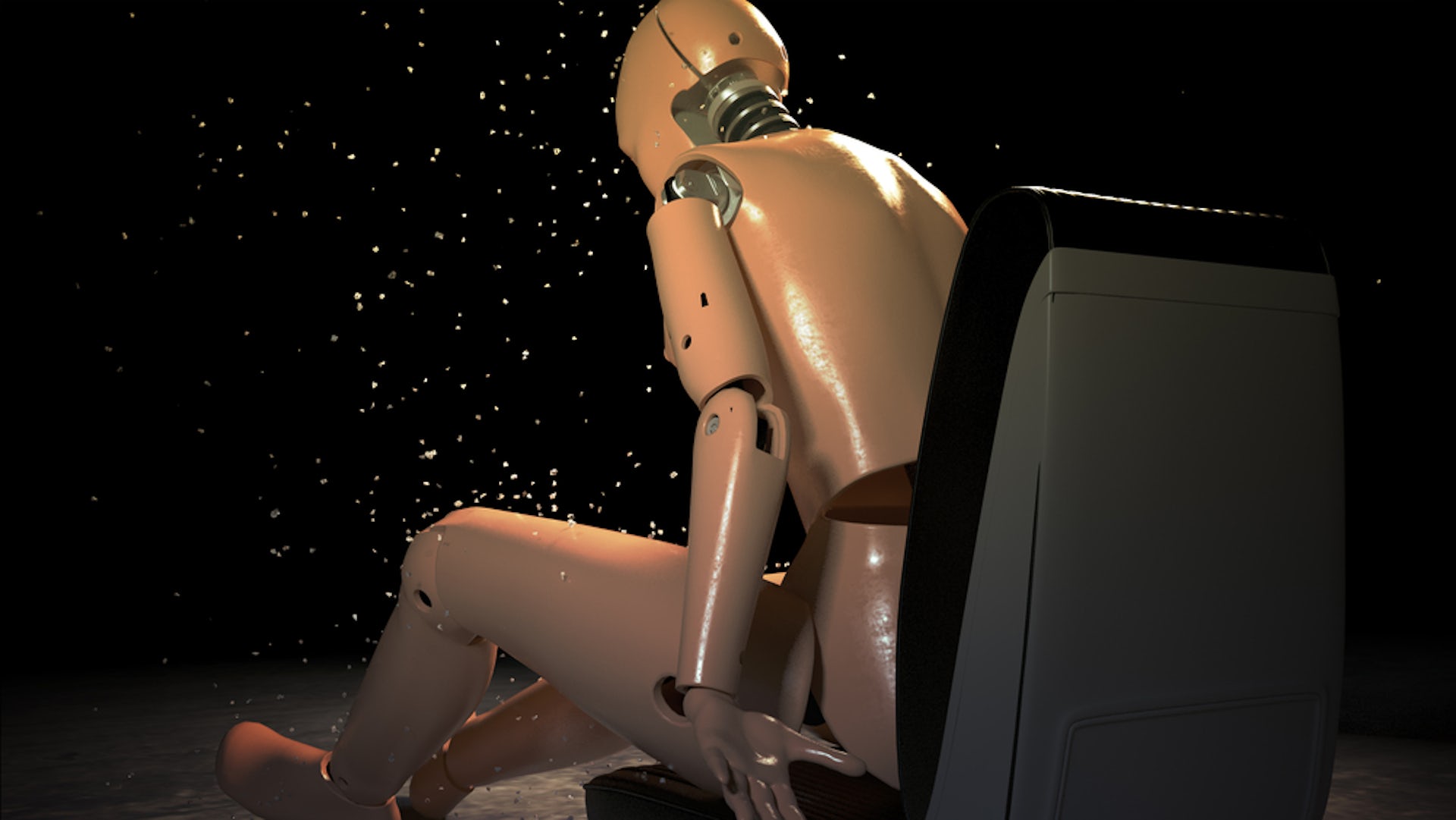 Ouch! But at least I look good.
Ubiquitous Euro NCAP safety testing has also been instrumental in subtly changing the shape, form and size of cars developed over the past two decades. An increased focus on stronger structures and safety features (for both occupants and pedestrians) has typically made cars larger and heavier, but it has also shaped car design. To depart from this with radically different forms, would not only be an expensive development, but could be regressive to occupant and pedestrian safety.

But other future technologies could change all this. Autonomous, self-driving cars could alter the focus on safety (perhaps the number of accidents will be vastly reduced, an outcome that insurers are already recognising and ergonomics (if the car’s driving itself, why sit in the driving seat?), allowing designers to play around with design in exciting new ways. And if that happens, perhaps cars will begin to look like the future after all.